Before the fermenting and editing, there is a moment of inspiration. A snippet of melody, a line of poetry, a strumming pattern, a chord change, a picture, a movie, an encounter, a concept--there is something that hooks in your mind and demands your attention--something that makes you feel something. And after you feel that something, the rest of the entire process is following that feeling to a new experience. 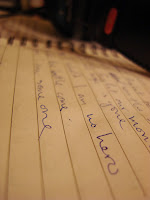 For today's song, "Lo and Behold," the thing that caught my attention was a chord progression. I was sitting with my guitar (as I tend to do) and stumbled upon it. The changes were faster than the ones I normally use though the chords themselves were my default chords. It was a little different and a little exciting.

I made some adjustments to arrive at a progression that I liked and then started playing around with melodies. To contrast with the quicker chord changes, I tried holding longer notes in the chorus. While the rest of the song changed dramatically as it went through the writing process, that aspect of the melody--the sustained note at the top of the chorus--remained the same.

At this point, I had no idea what the words were going to be and the melodic lines were still a little...let's say, "loose" for my taste. For me, lyrics tend to form and hold the tune in place, but I had no idea what to write about. And what word could I stick as that important long, first note of the chorus? "Oh" seemed like cheating... 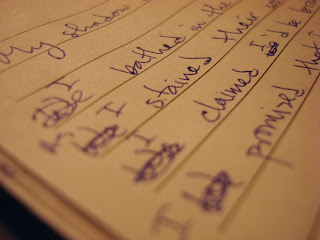 As if to avoid the challenge of the chorus, the first lyrics I came up with were for the first verse. Perhaps I was in a slightly violent mood, but the first line (which I later changed) helped set the tone for the rest of the song:

We bathed in the blood of our captors 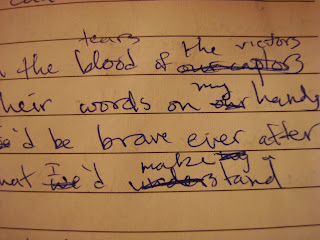 The rest of the first verse soon followed, but the chorus! Ugh. There is little as frustrating as knowing that there is a combination of words to express what needs to be expressed and not knowing what those words are or in what order they should be in. Oh, go, slow, show...

After much thought, I did come up with a first line for the chorus that felt right, and with that in place, the rest of the song came together relatively quickly. It also wasn't long before I found myself dancing around my apartment rocking out to my new baby.


In retrospect, it does kind of feels like it "just came to me," but as I think back to the struggle to get it to where it is now, it becomes quite clear that it did not just "fall into my lap." But perhaps that is the magic of certain songs--though the process of getting to the destination could have been difficult, the final product simply feels so right that all the hardships are forgotten and you believe that there was never any question about the destination or of your arrival.


Lo And Behold
By Rachel Oto

Lo and behold
I am no hero
Ooh, only when I’m done
Will I know I’m the one

Ooh, only when I’m done


Will I know I’m the one to save me