Firstly, I would like to say "Thank you!" to everyone who has Liked my Facebook page so far! The support really means a lot to me and I hope that I prove to be a worthy block of text/picture/video/audio in your newsfeeds.

Secondly, please welcome to the world the first piece from Outlines and Offerings, "Mary"--a song about a "little lamb" who wants to escape the pasture. (It's more badass than it sounds, I swear!) 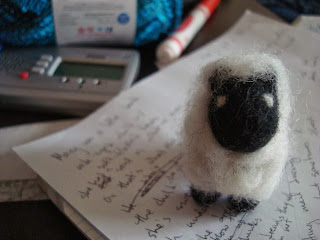 Given my fondness of wolves, sheep and the twisting of expectations, I guess it isn't surprising that this line popped into my head one day:

Mary was a little lamb


I got through a verse and a chorus when I became pretty sure I was going in the wrong direction. The chorus dragged and the melody was boring (I honestly can't recall what the tune of that first draft was), but I wanted it to work so badly! I set it aside and after a few days attempted to write a second verse. It was like decorating a crumbling house. Frustrated, I put it down again.

It wasn't until four months had passed did I pick it back up. I was sitting on my bedroom floor with my guitar amusing myself with a very simple arrangement of "Twinkle, Twinkle, Little Star." After playing through it a couple of times, I started to wonder what other songs I could arrange like that (a simple melody over arpeggiated diatonic chords). I'm pretty convinced my mind had never stopped thinking about my previously abandoned song, because it suggested "Mary Had a Little Lamb." And then it said, "And make it minor."

That's how I should start my verses!

Everything suddenly made sense. I pulled out the lyrics I had previously written and before I knew it, I had melodically interesting verses and, by my standards, an elegantly simple chorus. I love it when a song comes together.


A few minor revisions and some production later, I found myself with this:

Mary, tired of wearing fleece
Of being a docile, fluffy sheep
Took a chance and jumped the fence
The shepherd fell asleep

At next count, the truth came out
The little lamb was forest bound
The flock thinks that she’ll come around
And wander back down to the pasture
Bat her eyes and eat the grass but

Thank you again, for all your support! I hope you enjoyed "Mary"--the next song will be posted on Thursday! Until then...