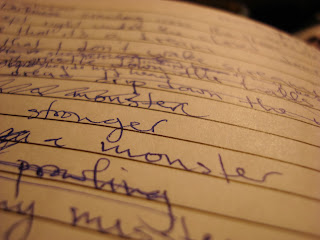 The house looked nice enough. The floors had just been redone in most of the rooms and the kitchen...Oh, the kitchen! The kitchen had these beautiful, huge counters that screamed to be covered in platters of homemade cookies and cakes. Yes. It looked nice.

Thudding in the walls, scurrying behind the oven, thrashing under the sink, and one terrifying night, rustling and squeaking in my bedroom as I tried to fall asleep. Many nights were spent making angry cat noises in the dark trying to keep the rodents away. I know that rats are smaller than me, but that doesn't stop them from being scary and unwelcome. 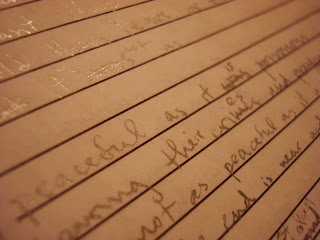 I guess there is some truth in the idea that our struggles give us material to write about, because in my frustration and anxiety over the rat infestation, I was inspired to write lyrics to a tune I had been working on for months. It was a song complete with lines about "beady eyes searching the floor," "hasty hands through careless piles" and heavily veiled references to rat poison. It was great! And then I re-read what I had written and went,"Are you kidding me? A song about rats???"

There's really nothing wrong with a song about rats, but to me this song just felt so...Domestic? Contrived? Not cool? Like an ad for an extermination company. That's what it was--this song could have been the anthem for some pest control operation. I put it down, let it simmer on the back burner.

Writing about rats wasn't going to work, but the first draft did start me in the right direction. Working in my favor--though I don't think I realized it at the time--was the underlying concept about fighting things in the dark. At some point (almost a year later), I realized what I needed to be fighting. I had to fight what we all fight in the dark--our monsters.

I wouldn't say that it came easily. If you look at my notes you'll find many, many layers of edits and rewrites, but in the end, it seemed to come together. 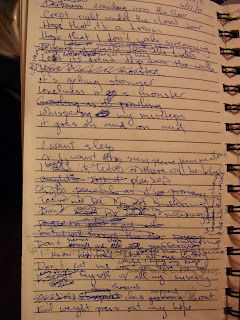 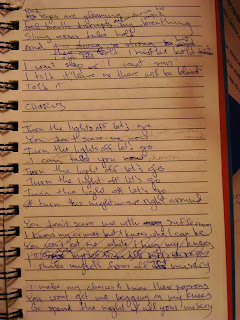 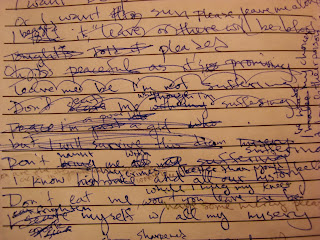 The landlords never took care of the rat problem, but thankfully I have since moved out of that house. However, while the rats are gone from my life (hopefully), there are still nights when the monsters come out, and at those times, it's nice to have a song to combat them with.

Sleep or I want sun
I begged it, “Please
Leave me alone”
Pleaded

Sleep or I want sun
I told it, “Leave
Or there will be blood”
Told it


Go spend the night with all your misery

Here's to fighting our monsters, both in our walls or in our heads.