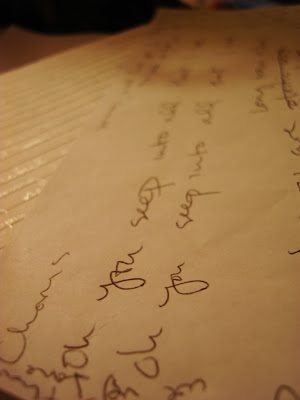 "Stained" was one of those "assignment songs." For a songwriting class, we were instructed to write a ballad (which was defined as "No faster than 65 beats per minute"). For some people that's easy. For others, like me, that's something of a challenge--my default tempo is around 180 bpm. 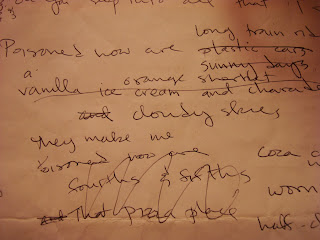 So, I was moseying along like a lethargic horse and managed to come up with a chord progression and melody that I liked. Actually, if my memory is to be trusted, I came up with the chorus pretty quickly. I remember making the conscious decision to keep it really simple, because in my mind there is little as boring as delivering a lengthy, verbose chorus at a snail's pace. And then repeating it. So, very early on the chorus was set as this:


Oh, you seep into all that I see 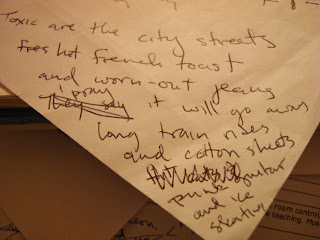 Oh, you seep into all that I see 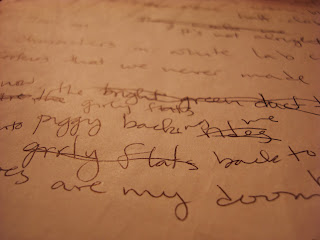 In a previous songwriting class, we were introduced to the notion of taking specifics about a situation and tying them into universal experiences. Though I had a LOT of specific details to help me write "Stained," many of them were too specific, some of them were just kind of strange, and some of them made no sense out of context. And while I made a few attempts to add context back in, it just slowed down the song (which you don't want to do when you're already going really slowly). 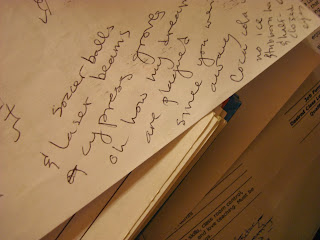 And for me it was. Perhaps it was the stress of the semester or a myriad of other things on my mind, but the first time I played it through to myself...Sometimes you just know you have it right.

(NOTE: I know the assignment required the song to be slower than 65 bpm, but sometimes songs just want to go a little faster than what the teacher wants...)

Tainted are the city streets, hot French toast and worn out jeans
I pray it will go away
Long train rides and cotton sheets
Rock guitar—these memories are stained
I say, “It’s all okay”
But

There’s no running without stumbling on
Visions of all the things that we have done
All the blocks, boulevards, stars and stairwells are stained
Oh oh

‘Cause
You’ve seeped into all that I see


Oh, you seeped into all that I see

Thanks for reading and listening!