That's right, we are less than a week away from hitting the road! Just a couple rehearsals left and a handful of things left to do on our tour prep list, and then we're off!

One of the big projects I've been working on is my new EP, Run, set to release this Friday. For over two years this EP has been marinating in it juices. Since its conception, I've been signed to AndromiDen Recordings, replaced songs, written new songs, grown so much as an artist, and promised its release more times than I'd like to admit.

But now it's really happening. Run is actually going to be released! This Friday! Just in time for the Stardust & Stagecoach Tour! And to celebrate, I'm letting you peep the album cover early. 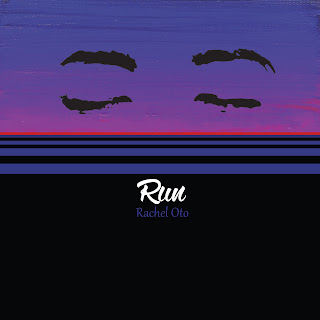 Now listen to "Leap" and get excited. ;)

First, a rough schedule of dates (more are on their way!): 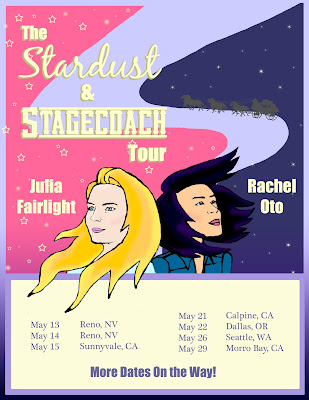 Second, ONE week until we hit the road and I feel like I haven't properly introduced myself! Let me remedy that...

What instrument do you play on this tour?
- My voice and guitar

What other instruments can you play?
-...I'm decent at snapping, stomping and hand-clapping...And I can plink on a piano.

When and why did you start playing your instrument?
- I've been singing since I was five. I started guitar when I was 10 and found my mom's old acoustic guitar in my parents' closet. And by "started" I mean that I would lay the guitar down on a stool (in its cardboard box, no less) and would play various combinations of out of tune open strings. Not long after that, my parents bought me an electric guitar for Christmas and enrolled me in lessons.

What other bands/groups/ensembles are you a part of?
- Currently, my solo project is my only project.

Have you been on tour before?
- Nope.

Name one thing you have to take on the road with you?
-Hard to say right now, but I feel like I'm going to have to take my phone with me

Are you more Stardust or Stagecoach?
- Stagecoach! I have a fair amount of Stardust in me, but when I hit the stage, I'm Stagecoach all the way!

Would you have survived a cross country trip in a stagecoach?
- Yes. I would be rather irritable by the end of it, but I would survive.

Given the opportunity, would you leave Earth? The solar system? The galaxy?
-I don't think I would leave Earth. Or the solar system. Or the galaxy. Maybe I would change my mind at some point, but right now I feel like my place is here on Earth.

What are you most looking forward to on this tour?
- Playing shows with the band! I have waited to do this for so long!
Posted by Rachel at 8:00 AM No comments: