In keeping with my search to understand how stories from the past affect my present, I had the opportunity to speak with my grandparents recently and hear some of their stories.

My grandparents are Japanese American. When they were young, America entered into World War II and they, along with their families and over 100,000 other people of Japanese ancestry, were placed in "relocation camps" to ensure that they weren't acting as spies for Japan. I had heard the narrative before, but I hadn't previously heard very much from my grandparents on the topic.

My grandma insists that she doesn't have many stories from her time at the camps. She was 12 when they got the notice to leave. My grandpa, who was 15 at the time they evacuated, told me a lot about the structure of the camps but gave only glimpses into his personal experience...

I still have to sift through my conversations with my grandparents (they let me record them), and organize my thoughts, but more on this to come!

And few pieces of news...

I'm featured in Art Muzeo Magazine's debut issue! I will also be playing the release party on Saturday, February 4

Additionally, I will be playing an acoustic show with Poeina at Backyard Coffee Co. in Redwood City, CA, on February 18. Time yet to be announced, but it's going to be a fun night! 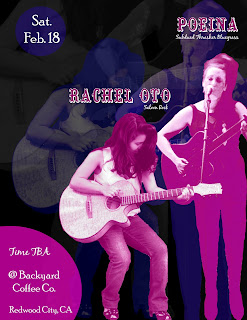