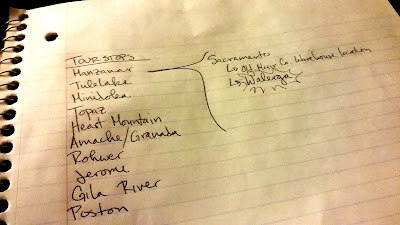 In that twelve day period [after the notices to leave went up], automobiles and big items like that, they had a storage place right close to where Sacramento Bee is now, Muir Company Warehouse…It was a warehouse. And that’s where my folks stored this car they had bought. It was fairly new. I forgot if it was a Ford or a Mercury—it was one of them. It was stored there. And any other things that was big and which you couldn’t pack up I think you were able to store there too.

And the people that didn’t have a place, or they had a whole home and a garage or something or a barn, they stored it right there. They didn’t sell the house or anything. And at that time they were able to—first generation people—were only able to buy homes or a house if they had a son or daughter under their name, because at that time “Orientals” were not allowed to become citizens.

Anyway, this relocation camp [Walerga Assembly Center]—temporary camp—we were there about a month I think. We were there because…We were going to Tulelake so they were getting the camp built--we had to be there until they got it built enough so we could move in. So when we got notice at Walerga to go, then they put us on the bus and—what was the station that they loaded us onto railroad cars? You know, the [railroad cars] that have seats. And then from there we went up to Tulelake. I think it was just a one day trip.

(An excerpt from my first interview with my grandpa, January 14, 2017)
My thoughts:

1. I'm going to have to visit the Sacramento Bee on my trip. The warehouse where some of my family's belongings had been stored might not be there now, and in the grand scheme of things, where people stored their stuff doesn't seem like a particularly interesting part of the story, but...(cont. in number 2)

2. My great grandparents had recently bought a car, but they had to keep it in storage?? STORAGE??? I guess I have been lucky so far and haven't had to keep a vehicle in storage, but I may or may not have experience using storage facilities, and the thought of keeping my car in one of those facilities is a little depressing (though definitely better than having your car stolen). Also, how many Japanese-American families were keeping their vehicles in storage? ALSO, how big were these storage units?? AND, how expensive was it to rent a storage unit large enough to fit your car and all the rest of your worldly belongings that you couldn't take with you in 1942?

3. I'll have to do some digging and learn more about the anti-"Oriental" laws that were in place at the time

4. Consider Walerga added to my list of places to visit on my travels. When I was a child, I heard the name "Tulelake" come up often enough for me to remember, but I had no idea that Walerga (sometimes referred to as the Sacramento Assembly Center) even existed. I found this website useful in my search for more information.

I'd love to hear your thoughts on my family's story and their experiences! Let me know on Facebook and Twitter, and don't forget to use #ShadowPathsTour!
Posted by Rachel at 8:52 AM