Happy Friday! I was digging through the archives and found this fun video of my band and me playing Dockside, Too in Morro Bay, CA. We were so blessed to have such an enthusiastic and adorable audience that evening.

Through all the leg work, research, booking and organizing, it's always inspiring to remember the joys of touring, playing and making music. 😄
Posted by Rachel at 11:06 AM No comments: 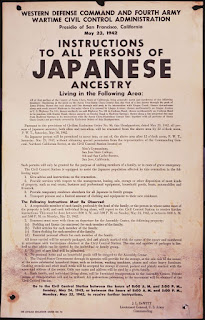 I've been shut away for the past couple of days typing out the interviews I had with my grandparents. They were both wary when I asked to record their accounts of the camps, but it wasn't so much that they didn't want to talk to me about it. It boiled down to:


Now, I can understand number 2, though I find it an interesting sentiment given how freely my generation posts to the internet, and I have been doing my best to share their stories in a respectable fashion without revealing too much... But number 1 almost made me laugh. There had to be something to tell.

Maybe it was just my profiteering songwriter side looking to strike a mine of gritty details that I could weave into songs, but I was convinced there was a lot to tell, so despite many reprisals of "My Story is Very Short" and "I Don't Have Much to Tell," I managed to get them to sit down with me and simply start talking.

At first, I got facts, figures, and generic information (though it's always good to hear these things from firsthand sources)--how things were organized, where they were sent, etc. Then we went wildly off course to discuss all the exciting adventures that were had after leaving camp (more on this later). And then, finally, once they were comfortable, they dove into their stories from camp.

They talked about how dusty their barracks got, how cold the winters were, how hot the summers were. They told me about the college-age men who would play football with a loaf of bread, of brains mixed into their scrambled eggs, of miraculously passing Geometry. They told me about chiggers, and puddles with snakes lurking in them, of cramped apartments and train rides with the shades pulled down, of the discrimination of strangers and the kindness of neighbors.

Listening back, it struck me how much their stories focused on the details and the actions of the people involved, and how very little they commented about how these events made them feel. In songwriting, we are taught to "show not tell", so in that sense they did indeed provide me with a songwriting goldmine...

But on a different level, emotional removal is an interesting thing to observe. I kept thinking about what would have happened if EO 9066 came out when I was twelve or fifteen (how old my grandparents were when they were relocated), or if it came out today. How would I respond? How would my contemporaries respond? And would we come out of the experience--if we weren't able to top it--saying that there wasn't much to tell? Would our stories today be as un-colored as my grandparents' stories?

I know that age plays a huge role in how my grandparents experienced camp, but I think I was expecting there to be more emotion. Anger, hurt, sorrow--something. And I'm not sure if that's the social climate right now shaping my expectations or if it's the social climate from the 1940's shaping their experience of the camps and/or their response to my questioning, or if it's some mixture of both that makes both sides seem puzzling to the other--me wondering why they don't have stronger emotions to express and them wondering why I'm asking about things that happened so far in the past.

...As I type this, I begin to realize why I personally never really felt emotionally connected to their stories of the camp...

Posted by Rachel at 8:30 AM No comments:

More on the Tour

I've been repeating the names like some twisted mantra to keep me focused on my mission. They were the first pieces of information I collected, some of them dusty but familiar to my ears and some completely new. I committed them to memory. I found them on the map. I traced the highways and invisible roads that connected them.

And from these concentration camp locations, I found the nearest big cities. And start imagining how the landscape changed while driving from one to the next, and who would be sitting at the bar in towns I had yet to learn existed, and how often we would need to stop for gas...

I think I mentioned in a previous video, but let's just make it official...The Shadow Paths Project includes a Shadow Paths Tour!

This August, I will be hitting the road with my band and a videographer, and travel to each of the Japanese-American internment camp sites, playing shows along the way. The tour will take us from California all the way to Arkansas with multiple stops in the states we pass through. Needless to say, I'm super excited!

I'll post a video going into some of the details of the tour this Friday, so be sure to keep an eye out for that. In the meantime, check out this flashy Shadow Paths Tour Announcement Video! 😉
Posted by Rachel at 7:00 AM No comments: